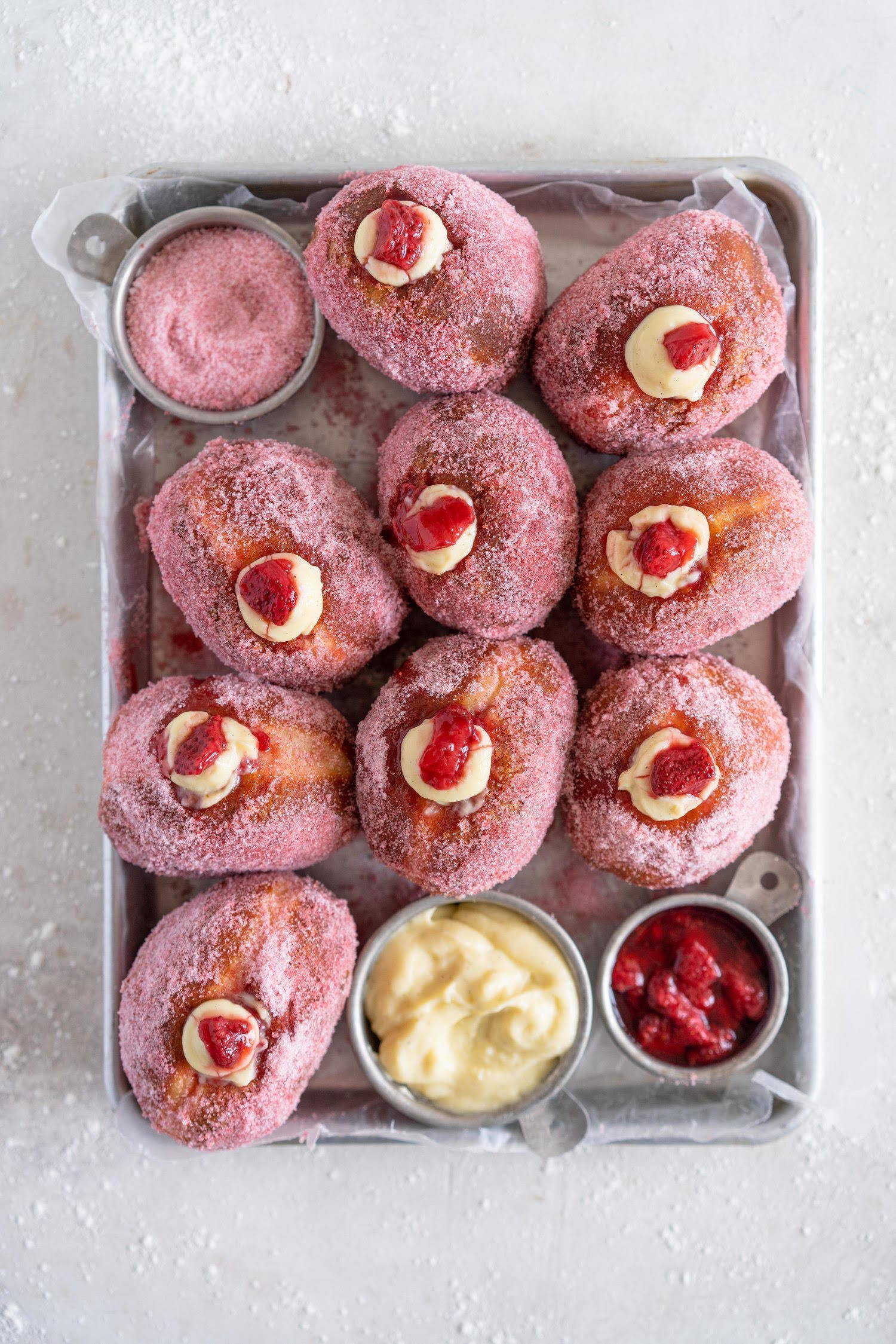 Roasted fruit and pastry cream in a doughnut is a sure fire winner - the great and easy thing about it is that it is super adaptable, this recipe would work with almost any roasted fruit, or you can leave it out entirely and just go for a plain custard / pastry cream filled doughnut. You really can’t lose. 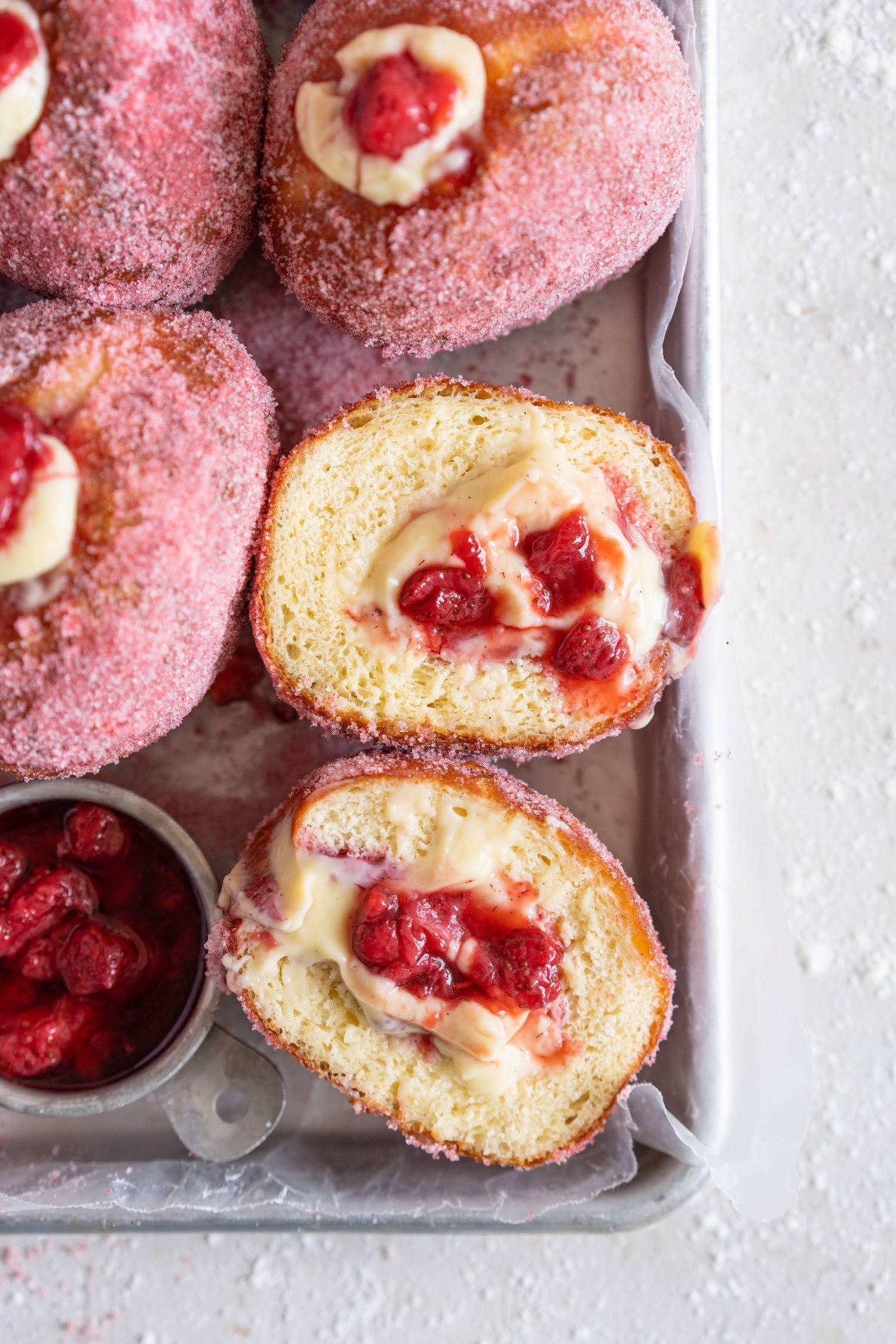 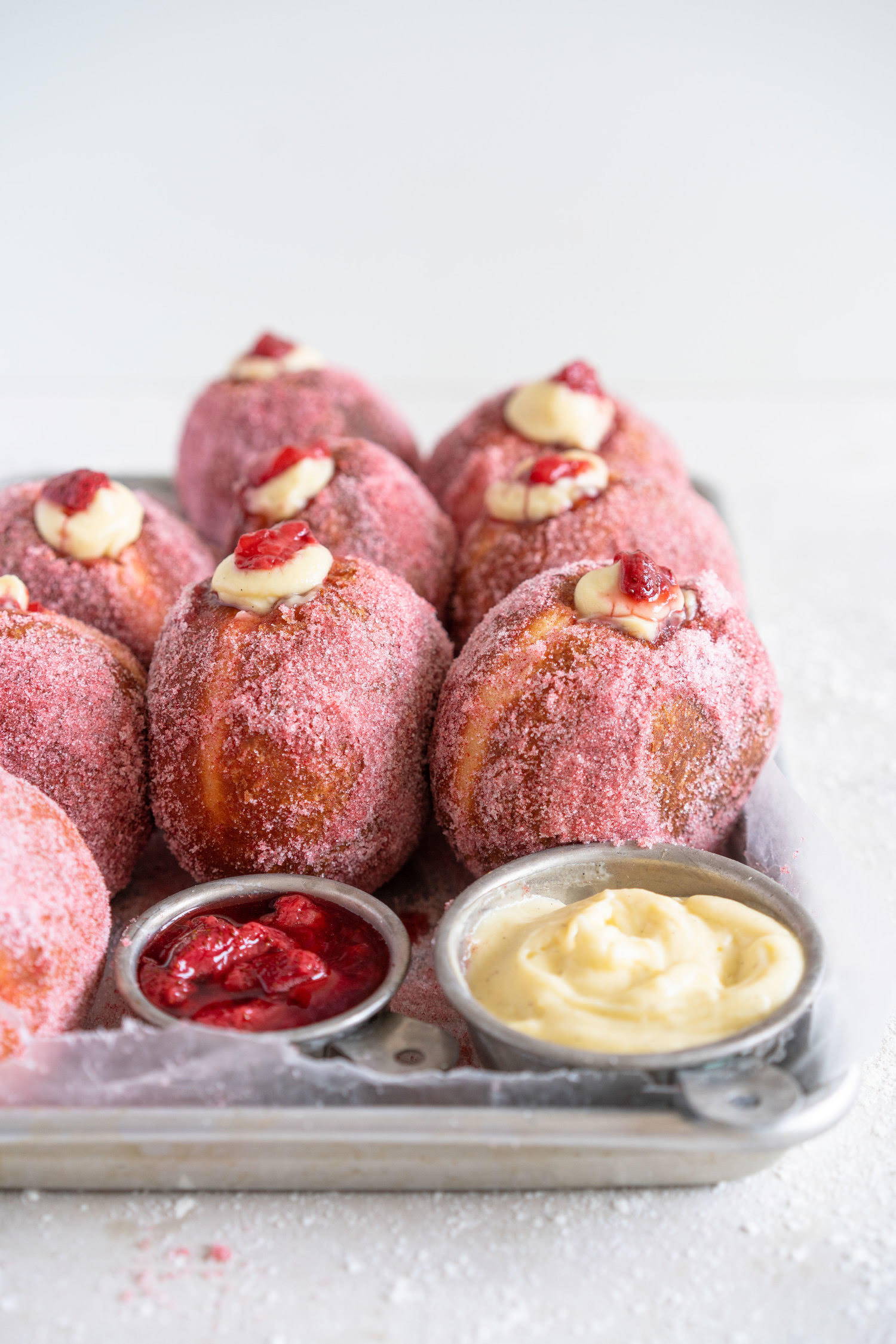 Preheat the oven to 350°f / 180°c. Line a sheet pan with tin foil. In a medium bowl, toss together the strawberries, sugar, vanilla bean paste, and salt. Spread onto the sheet pan. Bake for 25 to 30 minutes, until the fruit and juices are bubbling. Transfer to an airtight container and chill until ready to use.

In a large bowl, whisk together the yolks, sugar and cornflour in a bowl.

In a medium pot, warm the milk and vanilla paste until there is movement just around the edges of the milk - do not bring it to the boil.

Remove the milk from the heat, and, whisking constantly, add half of the milk mixture into the egg and cornflour mixture to temper the egg yolks. Whisk briskly for 30 seconds. Transfer the milk-yolk mixture back to the pot, and return to a medium heat. Whisk constantly until very thick.

Remove from the heat and whisk in the butter, mixing well until totally combined. Allow to stand for 5-10 minutes, whisking occasionally. Transfer to an airtight container and allow to cool completely.

In a small bowl, combine the yeast, milk and 2 Tbsp of the sugar. Mix well, and leave to sit for 10-15 minutes, or until foamy.

In the bowl of a stand mixer fitted with the dough hook, combine the flour, salt, and remaining 2 Tbsp sugar. Mix briefly to combine. Add the eggs, vanilla, and foamy yeast mixture to the bowl. Mix on low for 2-3 minutes, until the dough is starting to come together. It may look slightly dry but do not worry - it will mix together nicely in the next steps. Increase the mixer speed to medium, and mix for another 10 minutes, until the dough is soft and smooth.

Transfer to an oiled bowl, and cover tightly with plastic wrap. Place in a warm spot until doubled in size, approximately 1 - 1 1/2 hours. Alternatively the first rise can be done overnight in the fridge.

Turn the dough out onto a well floured surface. Weigh the dough, and divide into 12 equal weight portions. Roll each portion into a tight ball. Place the rolled doughnuts on a baking tray sheet with parchment paper, leaving adequate space between (you may need two baking sheets).

Leave the doughnuts to proof for a further 20 minutes. When you poke them lightly with your finger, it should leave a small indentation that springs back.

While the doughnuts are proofing, heat neutral oil in a large heavy-bottomed pot (cast iron works great). Heat the oil to 350°f / 180°c. Place a wire rack over a baking sheet lined with parchment paper. Place the sugar and freeze dried strawberry powder in a shallow bowl.

Once the oil has come to temperature, test it with a few scraps of dough. Gently lower the doughnuts, two at a time, into the hot oil. Cook , flipping every 30 seconds, for 3-4 minutes, until golden brown. Remove from the oil using a slotted spoon and place on a cooling rack. Allow to cool for 30 seconds before tossing in the sugar. Repeat the process with the rest of the doughnuts. Once the doughnuts are totally cool, poke a hole in them using a chopstick, and widen the hole using your finger.

Transfer the roasted strawberry mixture into a piping bag either with the end cut off or fitted with a very large round piping tip (I found it works best to just snip the end off rather than try and use a piping tip as then if you get the bag clogged by a piece of fruit, you can just squish it through the bag). Transfer the pastry cream to a piping bag fitted with a medium round tip.

Pipe some strawberry filling into each doughnut, then fill up the remainder of the cavity with pastry cream, finishing with a little dot of pastry cream on the top of each doughnut. Garnish each with a piece of the leftover strawberry, if desired.

Best eaten on the day that they are made.

Hi! I made this recipe- and everything was perfect! Thank you